Decreasing Drinking Can Lift Your Spirits 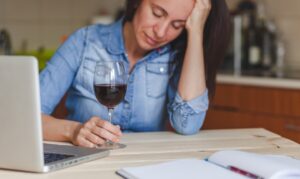 Adults in the U.S. used a variety of coping skills to handle the impacts of the coronavirus pandemic. While some increased exercise or tackled a list of home improvement projects, many increased their consumption of alcohol to cope. Unfortunately, this likely had the opposite effect than what was intended—rather than lifting spirits, picking up extra drinks can have a detrimental impact on resilience. The good news? Decreasing drinking can quickly reverse those effects.

According to a recent study released by Rand Corporation, “Nielsen reported a 54% increase in national sales of alcohol for the week ending March 21, 2020, compared with 1 year before; online sales increased 262% from 2019.” And, the study revealed that women, in particular, increased their heavy drinking (defined as four or more drinks within a couple of hours) by 41%. As take-home alcoholic beverages became a popular trend and people spent more time inside under intense emotional strain, an increase in binge drinking was a somewhat anticipated outcome.

While many who increased their drinking in the last year likely attribute that behavior to a need to improve their mood and outlook, interestingly their choice may have the opposite effect, according to a story by Well+Good, What Happens to Your Mood When You Quit Drinking, According to a Neuroscientist.

The story shares the insight of neuroscientist Kristen Willeumier, Ph.D., who says, “people often choose to drink to modulate their mood, with the goal of temporarily reducing negative emotions and enhancing positive emotions. However, because alcohol impacts multiple neurotransmitter systems it can result in a range of emotions from feeling energized, relaxed, confident, and happy, to feeling tired, aggressive, restless, irritable, and depressed.”

According to Dr. Willeumier, while alcohol may initially relax and uplift you, it may also lead to outcomes that could potentially make emotional strain worse, such as exhaustion or depression.

According to the 2019 National Survey on Drug Use and Health, 14.5 million people have an Alcohol Use Disorder. While individuals in this group may have also increased their consumption in 2020, the solution for them is well beyond just a simple habit swap for decreasing drinking. Recovery for those addicted to alcohol is a more complex journey. But for others—those who may have found themselves falling into a new habit in response to the COVID-19 trigger—there are tools that can help reverse the habit. Doing so can be a critical first step to getting on a healthier, happier track.